There may be no influence in the world more powerful than that of a great mother. It’s a statement that could not be any truer in reference to the mare Flo N Blu Boon and the impact she’s made on her offspring.

Owner Beverly Servi of Beverly Servi Quarter Horses has been blessed with some top-notch performers from the outstanding mare, with Bet Hesa Boon being one of her biggest earners and a stallion that Servi says has changed her life in many ways. There’s no doubt that with a pedigree like his, along with his jaw-dropping good looks, ability to produce only roan offspring, and success in the show pen, Bet Hesa Boon has quite an impressive resume.

Bet Hesa Boon, known around the barn as Boon, is the unique result of the pairing of a well-known cutting horse sire in Bet Hesa Cat, and an outstanding reined cow horse dam in Flo N Blu Boon. According to Boon’s trainer, Clayton Edsall, the cross was one that blended two of the very best from both arenas. “Of course, Bet Hesa Cat needs little explanation…,” Edsall shares, “His dam was a cow horse through and through. She was a great show horse herself…the cross really worked well.” Bet Hesa Cat has become a household name as a performer and sire, with earnings of over $267,000 and winning an NCHA Open World Championship. But’s its Flo N Blu Boon’s show record and ability that may be the bigger determining factor in the talent Boon exhibits in the pen. The mare herself won $66,949 and earned 21 AQHA points. She was an NRCHA Spectacular Bridle Stakes Open Champion, an NRCHA World Novice Non-Pro Bridle Co-Reserve Champion, as well as 4th at the World’s Greatest Horseman with Doug Williamson aboard, just to name a few. “Her list of accomplishments is long and this tells me that she must have been a sound, sturdy, and gritty mare,” Servi says, “..back in 2006 the payouts were much smaller…she worked hard for that $67,000.” Servi purchased the mare in 2018 and has never regretted the decision since. “We all know it’s a huge investment that goes into breeding, training, and showing horses. I didn’t know at the time I bought her what it really meant. It feels really good to own and breed great minded, talented, and stunning looking horses.” 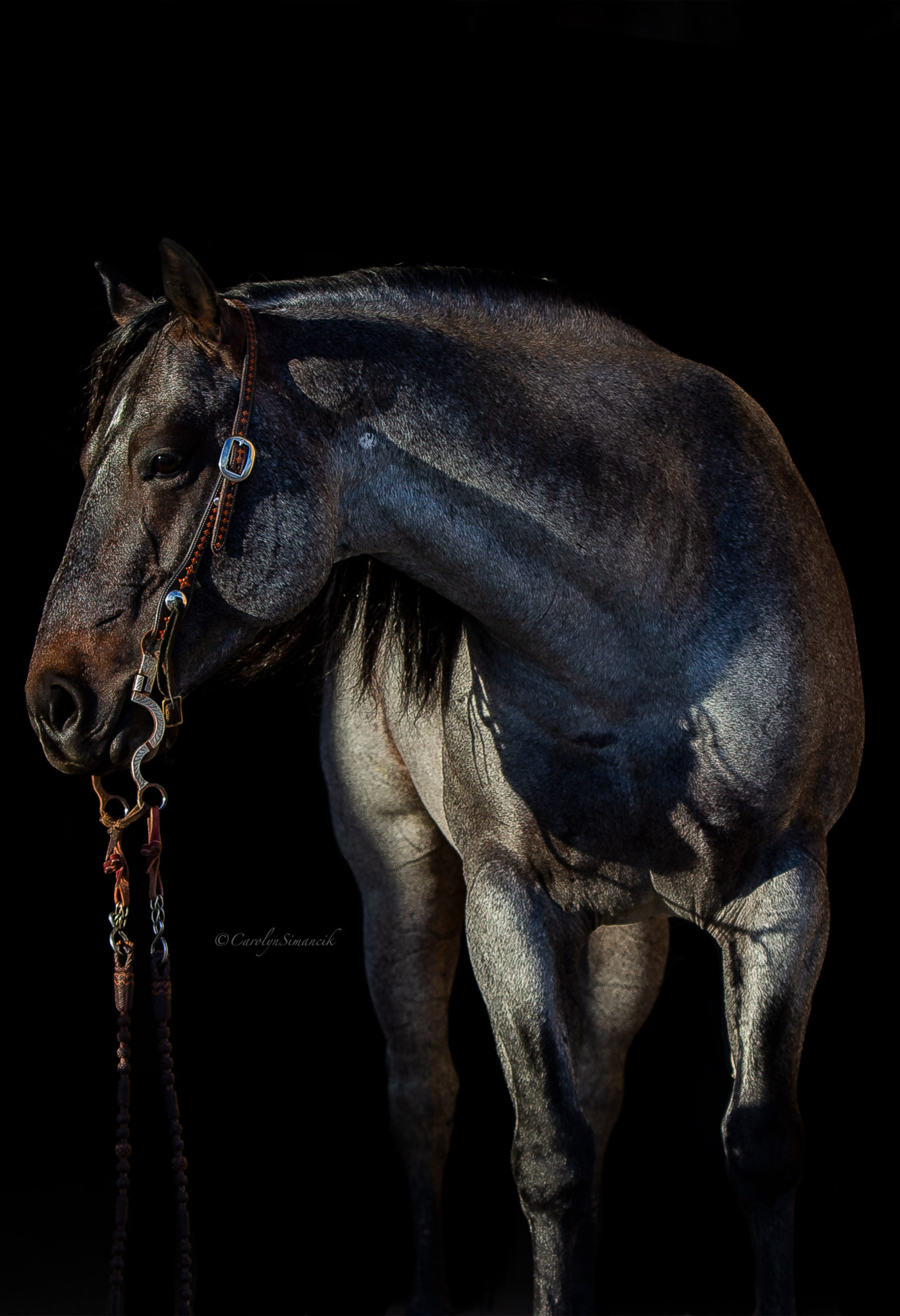 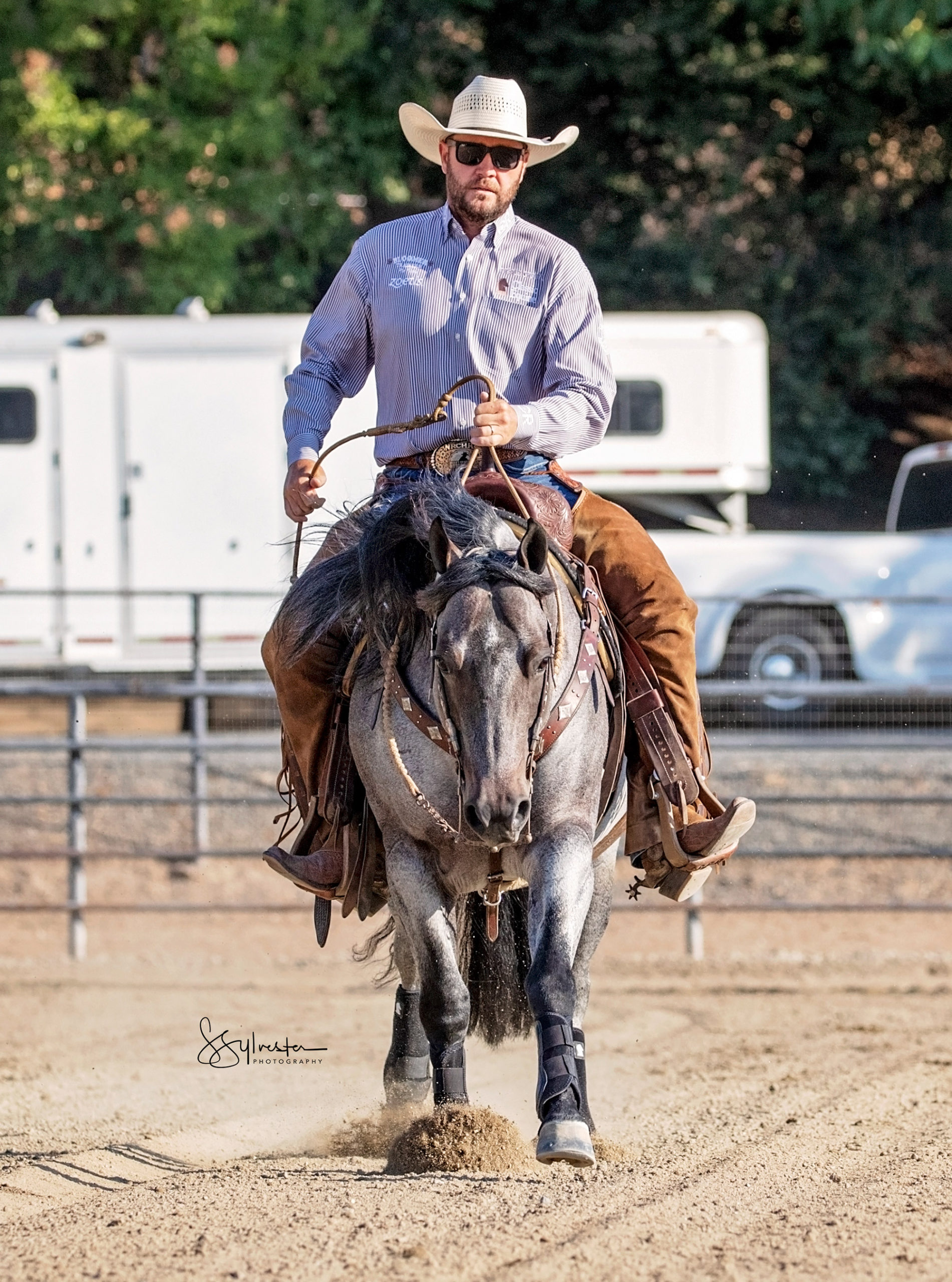 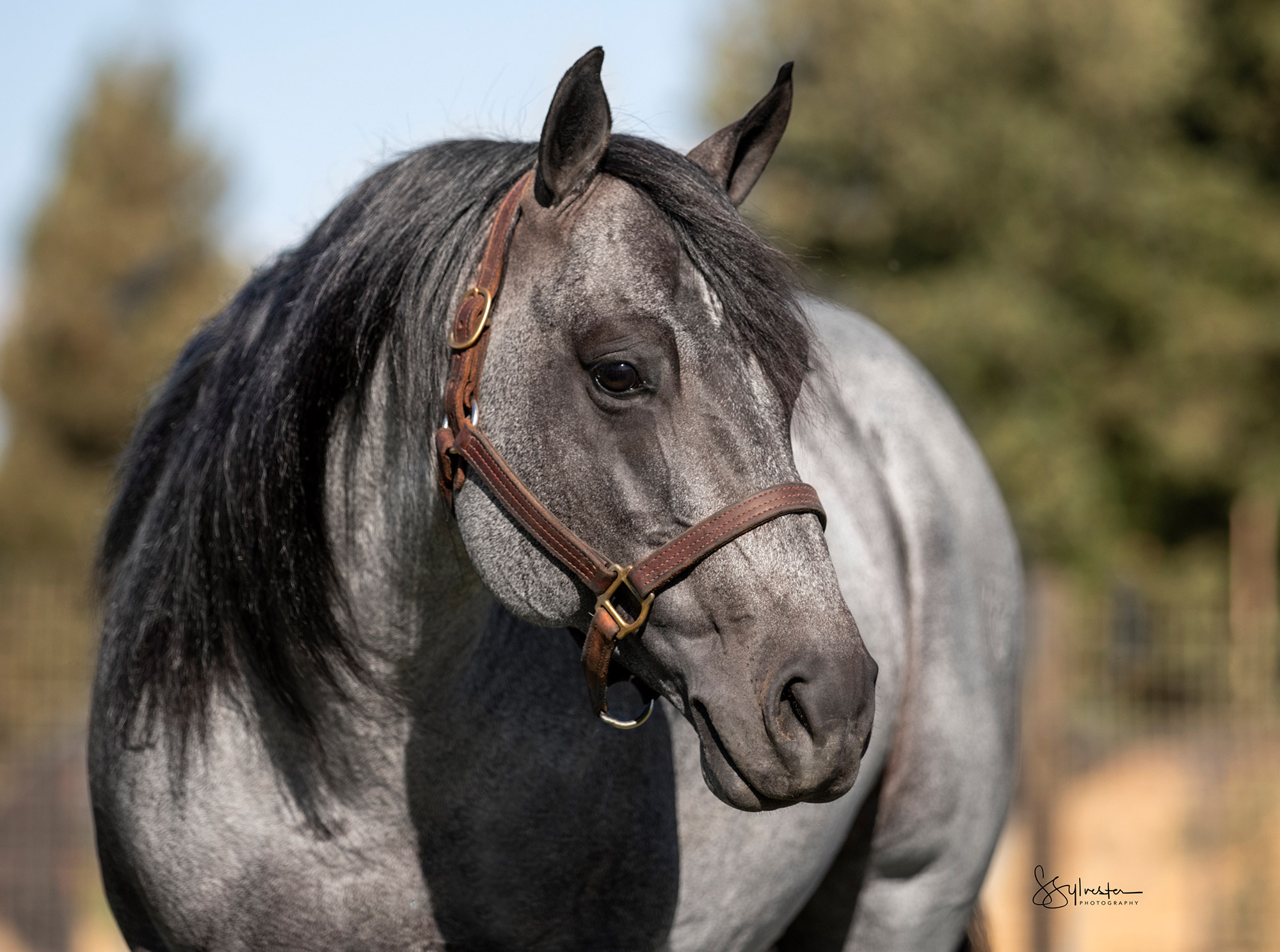 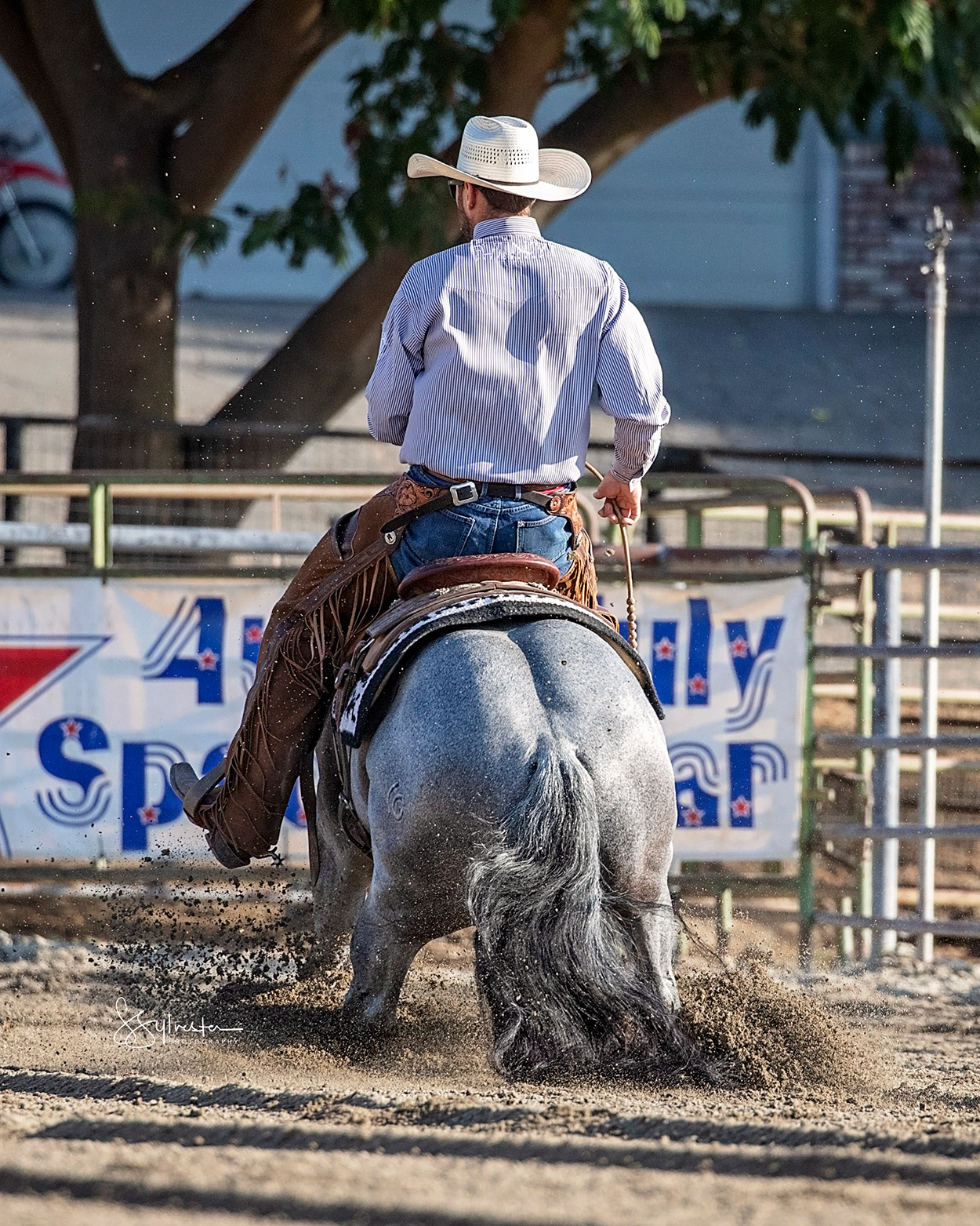 While he’s dynamic to look at on paper, Boon possesses another unique attribute that you don’t see every day; he’s homozygous roan, meaning every foal by the stallion is guaranteed to be a roan. Not often does one find a horse with such wonderful bloodlines, talent, and unique coloring, which is guaranteed to be passed to his offspring. Aside from color, Boon’s demeanor may be one of his greatest attributes. Both Edsall and Servi agree that the stallion’s manners are exceptional in every way. “Whether showing or on the ground he never wants to be in trouble,” the trainer shares, “He just really wants to get along all the time.” So much so that Edsall and wife, Chelsea, trust Boon enough for their kids to sit on the stallion and be around him with little worry. “Every single person who has met this stallion says they have never seen one so easy going…now that we know he will throw 100% roans in his offspring, I can honestly say that Boon has it all,” Servi adds.

Boon’s show record is certainly something to be proud of, as well. He is a two time (2018 and 2019) NSHA Open Derby Champion, was 3rd in the 2020 NRCHA World Hackamore Open, 2nd at the 2019 NRCHA Stallion Stakes Hackamore Open, and the 2018 NRCHA Stallion Stakes Novice Horse Open Champion, just to name a few of his accomplishments. Edsall says that he’s really an exceptionally athletic show horse, largely because of the way he stops. “He has so much stop,” he says, “It’s fairly unique when one can run hard and stop huge in the reining and then stop and turn quickly with a cow in the cutting, but Boon does it so well.” A horse the trainer dubs as easy to prep and show, Boon thrives under pressure and always shows as well as he schools, according to Edsall. Servi agrees and adds that there’s a special beauty in the way he moves, something she noticed when purchasing him as a yearling. “I can talk about that Boon has made the finals in every open event he has shown at. I can talk about when he won the first NSHA Derby…when people call me to ask about breeding to him I talk about what this stallion is and not so much about what he has accomplished. It’s one thing to win and be successful but for me, there is so much more to Boon,” she states.

The “more” that Boon’s owner refers to is the compassion she has in her heart for the stallion and the people who have been integral parts of his journey. She is extremely grateful to Garth and Amanda Gardiner, from whom she purchased the stallion, for their mentorship over the years; and to the Edsall family for their care of Servi’s program. She credits Clayton with always believing in Boon and bringing out the best in him and in her horse program. “…their (the Edsalls) knowledge and partnership is key to my horse’s and program’s success…I truly believe that when a trainer believes in a horse, they can do just about anything,” Servi states. Her program is one which has become well-known thanks in large part to the outstanding mare, Metallic Train, as well as Boon. “When you have a horse like Metallic Train you say, ‘Wow this is incredible and I feel so fortunate’…,” Servi says affectionately, “Being the owner of a homozygous roan stallion that has all the qualities you want in a horse is once in a lifetime. To own his dam- well that’s beyond special…I wanted quality horses and that’s what I got.”

When Beverly Servi set out to establish a breeding program, she had no idea she’d see the success she’s achieved to date. In purchasing Boon, and then his dam, she quickly saw the impact they’d make on her program, and more importantly, in her life for years to come. “…This is one of the hardest things to explain without sounding like an emotional silly little girl,” she says, “Horses like Boon don’t come around very often. He is one of a kind, he is the gem, the frosting. It’s a dream, it’s fulfillment, it’s gratefulness all wrapped up with a big colorful bow.” While the program is still fairly young, with the influence of a mare like Flo N Blu Boon and her picture-perfect homozygous roan son, the future is looking very promising for Beverly Servi Quarter Horses!